The brown coal deposits located near Sieniawa in Lebus are one of the oldest known and mined in Poland. The history of the mine dates back to the mid-19th century mining rights charter granted to Emiliensglück mining company by the Prussian Imperial Mining Office. The mine, which began operating in 1873, belonged initially to the junker family von Bockelberg. Sold in 1918, it became part of Halle-based Anhaltische Kohlenwerke AG. The output of the mine before 1939 reached 80,000 tons annually.
Devastated in World War II, the mine was re-opened in 1950 as KWB Sieniawa. In 1950 the output reached merely 8,600 tons, but production grew rapidly, reaching 137,500 tons in 1958. The deposits were mined within the pillaring system, based on stripping coal layers from excavations above the level of ground waters. The mine achieved a good ratio of the utilization of gross geological deposits, ranging within 20-40%. In 1983, the annual output reached the maximum level of 209,100 tons.
1997 saw the onset of liquidation of the mine, closed in 2002. Luckily, as the only underground brown coal mine in Poland it was soon taken over by investors willing to take the risk of continued mining. Thus, after being granted the mining rights in October 2002, the mine re-opened under the new name of Sieniawa Brown Coal Mine Ltd.

The mining operations of our company will lead to the creation of a 40-meter-deep excavation of an area of 12.5 ha. The harmful influence of this on the surrounding countryside is reduced by simultaneous reclamation of post-excavation sites above water-bearing ground layers. The process, run throughout the whole period of excavation, is based on the re-filling of abandoned saddles with bulk mass from current excavations, re-introduction of humus and the restoration of biological activity, with particular focus on re-forestation.
Owing to the absence of rivers, lakes or underground water reservoirs in the vicinity of the mine, the excavations do not affect the water resources and circuits of the region.
Noise emission from machines operating on the strip, including trucks, excavators, fillers, and bulldozers is not perceptible outside the grounds of the mine itself. Due to our policy of direct storage and sales, we have greatly reduced the discomfort of local population caused by the increased transit traffic in the village in former years. Owing to the absence of historical monuments on the grounds, the excavations do not in any way affect the local cultural heritage.
According to the environmental impact survey conducted by Proxima Geological Survey Company in 2002, the level of air pollution accompanying the mine, mostly caused by traffic does not break the requirements of the Polish law (Ministry of Environmental Protection, Natural Resources and Forestry ordinance, dated April 28, 1998, referring to the permissible concentration of pollution gases in the air; Dz. U Nr.25, poz. 355). 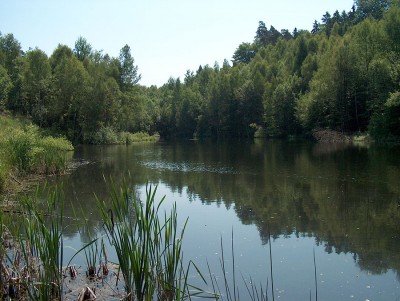 A perfect example of the reclamation of a former excavation site is Lake Ciche located near Sieniawa on the grounds of Forestry Superintendence in Świebodzin. Mined since 1970 until 1991, the excavation was re-filled with bulk earth from other sites and re-forested. Part of the excavation has been used to create an artificial lake, fed by rainwater and local springs. The restocked lake has become a familiar element of the local landscape, attracting anglers from neighboring towns and villages.